Founded in 1883, The Abbey Players of Belmont Abbey College have been an integral part of campus life for more than 135 continuous seasons. The theatre typically produces six offerings a year, plus special events, representing a wide repertoire of drama, comedy, and musicals. In addition to performance opportunities, The Abbey Players welcomes anyone interested in technical work. Technicians stage manage, run crew, and may help build sets, design and hang light/sound plots, and run shows through state-of-the-art instruments.

TICKETS
Tickets are online and almost always at the door 30 minutes before each performance. The cost for off-campus patrons is $10. Mainstage shows are reserved seating; special events are typically general admission. Productions are offered for ages 10 and up. Info: 704-461-6787 or AbbeyPlayers@bac.edu.

All productions are presented in The Haid Theatre. Click here for directions to the theatre via Google Maps:  https://goo.gl/maps/Wf1AVjaEnt12

pre-season special event!
A Piece of My Heart
by Shirley Lauro
August 25-27 – 8pm
August 28 – 2:30pm
directed by Christopher Donoghue
GET TICKETS NOW!
The Abbey Players are pleased to present – for one weekend only! – a special event: A Piece of My Heart by Shirley Lauro. This is a powerful, true story of six women who went to Vietnam: five nurses and a country western singer booked by an unscrupulous agent to entertain the troops. The play portrays each young women before, during, and after her tour in the war-torn nation and ends as each leaves a personal token at the memorial wall in Washington.
Performances are August 25, 26, and 27 at 8pm, and August 28 at 2:30pm. Tickets are available at the door 30 minutes before each performance and online HERE. Veterans are offered complimentary admission. The cost for off-campus patrons is $10. General Admission seating. Info: 704-461-6787 or AbbeyPlayers@bac.edu.

Participation
Open to any interested member of Belmont Abbey College and the surrounding area. Community members, students, faculty, staff, and monks regularly appear together, and we bring in theatre artists from the surrounding Metrolina area.

Auditions
All auditions are open; audition notices appear both on-campus, in local newspapers, and on social media. All of the audition forms, sides, and information can be found here: https://drive.google.com/drive/folders/1NQg27RNoTz76e1jO6e6_3zFR4-v-iPNo

Benefits of Being an Abbey Player

Student actors at Belmont Abbey College have been accepted into programs at institutions such as the Milwaukee Repertory Theatre, University of Washington, the University of North Carolina School of the Arts, the HB Studio Hagen Core Training Program, and the ALRA MA Professional Acting Program in London.

Technicians trained by the Abbey Players have been accepted into MFA programs such as the University of North Carolina at Greensboro based upon the strengths of their portfolios alone, since Belmont Abbey College offers a theatre minor, and not a bachelor’s degree.

A commitment to theatre, either as a performer or technician, is one of the qualifications for the Father John Oetgen, O.S.B Scholarship for Excellence in Theatre and the Performing Arts. It provides up to $5500 annually to each student accepted into the program. Directed by Simon Donoghue, students in this program will receive guidance and practical experience. 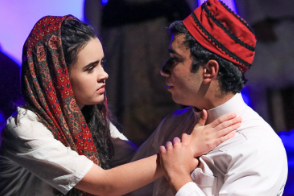 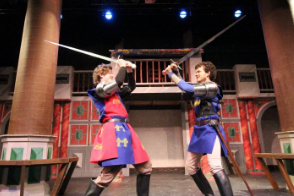 We take great pride in creating professional-level productions in an intimate setting. Join us, and you’ll enjoy some of the best performances in our region at an affordable price. For a complete schedule and to purchase tickets, visit the link below.

In the fall of 1883, Chester Arthur was the U.S. President. There were 38 stars on the American flag. We were 18 years out from the Civil War, enjoying a rare decade of peace. The Brooklyn Bridge was opened for traffic following ten years of construction. The first woman was hired for a position in the federal civil service. The Supreme Court rolled back the 1875 Civil Rights Act, allowing businesses to discriminate on the basis of race when hiring. Sojourner Truth, abolitionist and black civil rights advocate died; so did Alexander Stephens, the first and only Vice-President of the Confederate States of America. Despite the fact that this period is known as “The Gilded Age”, known for its excess and displays of wealth, the nation as a whole was in the middle of a three year depression.

Belmont Abbey College was seven years old, having been founded in April 1876 by monks sent from St. Vincent Archabbey in Pennsylvania. They arrived by train in Garabaldi, as Belmont was then known, and were taken by wagon to a frame house on what had been the Caldwell Plantation before the Civil War. Three students came with them, and classes began the same day. During the next several years, the fledgling institution was swept by disease and financial difficulties.

The monks were so intimidated by the hardships that they begged Arch-Abbot Boniface of St. Vincent’s to close the monastery and allow them to return home. Instead, the Arch-Abbot decided it was time for the small foundation to become independent. He asked for volunteers, and the first twelve monks were allowed to elect their own abbot, who would become the pivotal figure for the first 100 years of the monastery and the College it sponsors. The new community elected Father Leo Haid, OSB, a young instructor in the Humanities with a passion for. . . theatre. You were probably wondering where this was going! Shortly after Haid arrived to take up the leadership of both the College and the Abbey of Mary Help of Christians, to give Belmont Abbey its proper name, he instituted the practice of performing plays as readings. This continued throughout the next two years until there were sufficient students and interest to justify the first full scale production in Jubilee Hall, the College’s first theatre.

Haid wrote plays for the students to perform, and he nurtured the theatre during the formative years until drama found a permanent home in what is now Grace Auditorium atop St. Leo, erected in 1906. There were plays every year, and Haid particularly enjoyed presentations on the great days of the academic year. It has continued, with welcome changes. During the 1970s, community members began to participate in productions of what by then was known as the Abbey Players.

More than a dozen directors have come and gone. After 20 years in poor quarters, the Haid Theatre was created as the permanent home for the Players in 1987. Season tickets were added, and the Abbey Players also took on the role as the community theatre for Belmont. Which brings us to this season. The history of the theatre in Belmont now stretches across three centuries. Thank you for being a part of it, and helping ensure that we make it into the twenty-first century and beyond, a strong, vital element in the cultural life of both the College and the surrounding area we call home!

Donations provide a support for our high-quality productions, educational experiences, and community events.